Many English learners find it difficult to understand the rules of football, much less the appeal it has with the American population. (If you have an interest in learning more about American football, listen to my podcast episode #18).

Even those who don’t like football, sometimes show up at a Super Bowl party to watch the game and enjoy the fun, especially when your team is in the game.

I am from Washington, so Seattle is “our team”, and for weeks before the Super Bowl (all during the playoffs, actually) people throughout Washington would don their Seahawks team gear (e.g. shirts, jerseys, blue and green hair, etc), and yesterday the fans (#12 – because there are 11 players on the field and the 12th player equals the fans) were out in full force. 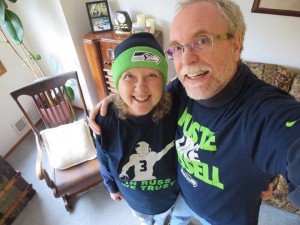 What is one of the best things about actually watching the Super Bowl? The commercials!

This year, companies spent upwards of $4 million for a 30-second spot. That’s crazy, I know!! But it is America, and this is one of the most widely watched television events of the year (that’s a HUGE audience for your commercial message).

The interesting thing about the commercials is that they are more like mini-movies. They are often silly and funny or filled with action. Many of them feature celebrities or adorable animals.

Here are a few of my favorite commercials that I saw during the game. (I only watched the second half.)