Wow, it has really been a while since my last blog post and podcast episode. I am sorry it has taken me so long, but if you have been following me on Facebook, you know that I have been pretty busy traveling and working at a new part-time job. I have been teaching Spanish to middle school and high school students at my children’s school since September, and I was in Mexico for two weeks last month.

I still work privately with many English students via Skype, on Verbling and iTalki, and I am working on some new English Fluency Now programs, which I will release in January 2016. Stay tuned!

In the meantime, I hope you enjoy listening to this new podcast episode about Broadway. In this episode, I tell you about the four Broadway shows I saw while I was in New York City attending the Polyglot Conference in October. I give you a little background about Broadway and a few great tips on how to save money on tickets for the shows.

This episode is full of useful vocabulary and grammatical structures that will help you speak English more like a native. So, pay attention and listen to the episode a few times (at least).

Get the Lesson Guide to read along with the transcript and use the open-ended questions with your private teacher during a conversation class.

Have you ever been to New York City?

Have you ever seen a Broadway show?

Tell me about your experiences and leave your comments below. Thanks! 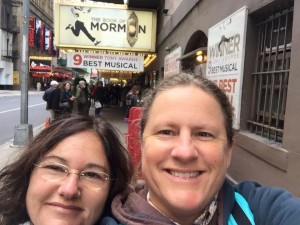 Nicole and I are standing in front of the theater before seeing The Book of Mormon,

where we had Standing Room Only tickets. 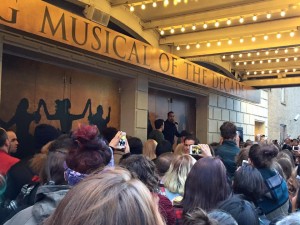 We waited in line with over 1,000 people for two hours to try to get tickets to see Hamilton.

After the show, the actors often come out of the theater to sign autographs and talk to theatergoers.